I passed the ITIL® Foundation Exam with 95%. Click here for my free study notes, tips and resources.

What is ITIL® Foundation?

ITIL® stands for Information Technology Infrastructure Library. There are currently five levels of the ITIL® Qualification Scheme. The ITIL® Foundation certification is the entry level certification among all ITIL® Certifications.

What is ITIL® v3 Foundation?

The “v3” in ITIL® v3 Foundation stands for “version 3” or “the third version”. There are currently 3 major versions of ITIL®:

What is ITIL® 4 Foundation?

After ITIL® v3, there is a relatively minor update to the ITIL® in 2011 which is currently known as ITIL® v3 2011. The ITIL® v3 2011 places more emphasis on business integration. There are new processes in Continual Service Improvement (CSI).

What is ITIL® 4 Foundation?

After ITIL® 4 Foundation, there is a major update to the ITIL® in 2019 which is currently known as ITIL® 4. ITIL® 4 puts service management in a strategic context. ITIL® 4 focuses on collaboration, automation and keeping things simple, just like the guiding principles of Agile, DevOps and Lean methodologies. This update allows ITIL® to be applicable to modern service management and software development.

If you have got the latest exam prep materials, there is a high chance that you can pass the ITIL® 4 Foundation exam on your first attempt. 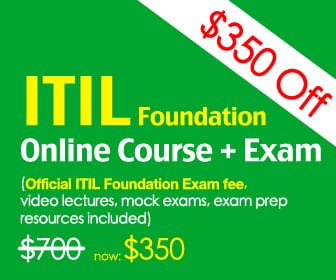